Many games incorporate fighting off enemies and engaging in battles of some sort, but in this genre it is the one and only thing to do in the game. Here players usually face off against another opponent in one-on-one battles, though some titles, like Super Smash Bros., allow for multiple characters to fight each other at once. Most fighting games give each player a “life bar” that sits atop the screen, which will deplete as they take damage, with the first player to empty the opponent’s life bar winning. Some titles have different terms for winning, like knocking other players off the screen or out of the ring, but in all these games the main goal is to basically inflict as much damage as possible without taking damage yourself. Special attacks can also be pulled off by inputting specific button commands, and some games let players chain together “combos,” a series off attacks that are completed one after another in succession and do massive damage. Most games include a blocking mechanic as well, offering additional strategy by allowing players to take less damage from attacks or sometimes none at all.

This Genre is typically Good for Kids Who Need Help With: Almost all fighting games involve the memorization of specific button combinations  which players must execute in order for their characters to pull off offensive and defensive moves. Most times, each character is equipped with special moves that, while more powerful than base attacks, require more complex button combinations to be memorized  Attacks can also be chained together into “combos,” long combinations of attacks that, when linked together properly, can be used to continually stun or “juggle” and opponent, enabling players to drain large amounts of energy from their foes. Pulling these off demands that players not only memorize incredibly long button combinations, but the precise order in which to implement them. Usually, it only takes one mistake to break a combo, so players with good Working Memory skills hold a considerable advantage over foes who struggle with memorizing steps and putting them into action.

Each opponent in a fighting game has a unique fighting style and move set; therefore, each one requires a different approach on the part of the player. Some fighters are defensive and rely on counter-attacks to cause damage, while other fighters are more aggressive. Furthermore, there are unusual fighters who have very unpredictable fighting styles. Not only do players need to change their approach when playing as different characters, but also when fighting against various opponents. If they fight the same way against one opponent as they do against another, then they will quickly fall victim to different opponent’s powerful attacks. In most fighting games, it is tempting for players to rush in and attack at the beginning of a fight However, in order to be successful, consideration must be given to how the opponent might counter. Some fighters have outstanding anti-air moves, which greatly damage opponents that jump in and attack, while others have strong defense. A good way for players to best their opponent is to stop, waiting to let the opponent come in and attack, then counter with a powerful special move. On top of this, may times player rely on one or two moves a little too heavily, as doing so makes them predictable in battle and easy to counter. In order to keep opponents on their feet, players must resist the impulse to go back to the same simple moves again and again. 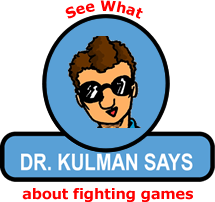 Not all fighting games are equal. Many parents and educators have legitimate concerns about the impact of violent video-game play on children, and while the research is inconclusive, many parents will understandably want to keep all video game violence away from their kids. At LearningWorks for Kids, we support parents in carefully choosing and monitoring their children’s video-game play for violence, racial and gender stereotypes, and other inappropriate materials.

You may find, however, that there are some fighting games that you will be comfortable wth allowing your child to play. Generally, these games may be more cartoonish in nature, and probably won’t involve any serious or realistic violence. While these games are combative in nature, many of them are exemplified by the fancy moves and mastery of the avatars’ skills, rather than by the amount of hurt or damage one does to one’s competitor.

Many parents have found that certain fighting games have encouraged an interest in martial arts on the part of their children. In fact, it is not at all unusual to find children attempting to model the moves they see from their favorite characters in a fighting game. If you can use your children’s interest in a fighting game to get them interested in the martial arts, this could be very helpful for them in developing better focusing and self-control skills. Many psychologists prescribe martial arts training for youngsters with ADHD and learning disabilities as an effective tool for improving thinking skills.

If you choose to allow your children to play some fighting games that you were initially uncomfortable with, this would also be an opportunity to talk about the issue of violence in the media. Playing these games with your children can also provide you with a chance to talk about important issues, such as bullying at school, and the importance of being able to stick up for oneself without getting into physical conflicts.

If you’d like to educate yourself further about the impact of media violence on children’s behavior, we encourage you to examine the following websites. Christopher Ferguson’s website featurespublications in which he describes his view of the research suggesting that media violence does not increase violent tendencies or thinking on the part of children. Douglas Gentile’s website describes his research in which he describes media violence as increasing violent tendencies on the part of children but also explores many of the positive aspects of video-game play.